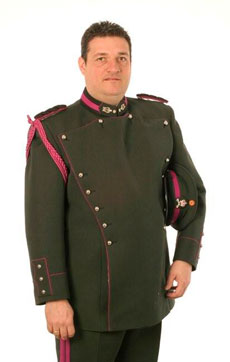 Olivier Brichau was born in Halle on April 21, 1973. He studied the trumpet with Louis Verreckt at the academy of music of his native town and was awarded the Government Medal. He then studied the cornet and the flugelhorn with Luc Vertommen at the academy of music of Zaventem. In the meantime he became principal cornet with the Brass Band Lembeek.

In 2004 he graduated for wind band conducting in Halle with Luc Vertommen. He also attended master classes with Jean Segers, Jan Cober and Danny Oosterman. Since some years he is solo cornet with the well-known Brass Band Buizingen.

As a conductor, Olivier was most successful with such bands as “Harmonie van Herne”, “Brass Band Sint-Cecilia Steendorp” and today still with the “Haasdonk Royal Fanfare Band” and the ensemble “Brass Friends” of Lembeek (since 2006). At the 2012 band contest of the Province of East Flanders, he successfully brought the Brass Band Steendorp into the Honor Division.

Since 2011 Olivier Brichau has been a member of the Trumpeter Corps of the Royal Symphonic Band of the Belgian Guides. On February 28, 2013 he has been appointed Trumpet Major of this exceptional ensemble.

At the Price of € 35 plus shipping and packing costs per copy.